The Whole-grain Goodness of Oatmeal 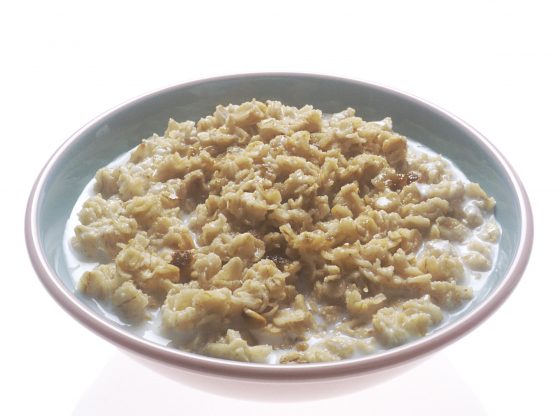 One morning you wake up and trudge into the bathroom. When you look in the mirror while scratching your belly you notice that it jiggles. “That’s odd” you think, “I don’t remember it doing that.” And that’s where it starts, the sudden realization that a layer of fat is starting to take up residence on your body, most notably across your midsection.

Whole-grain oats are tasty and inexpensive, and have a long history of health benefits. This simple grain has been shown to lower cholesterol and blood pressure, normalize blood sugar, appease the appetite, and ameliorate intestinal problems. Remember the oat bran craze of the 1980s? That phenomenon grew out of an overwhelming amount of scientific evidence that began to build during the 1960s, linking oat consumption with dramatic declines in blood cholesterol.

What Makes a Grain Whole?

Whole grains are kernels of grain that are consumed with all three naturally occurring components still intact: the outer fiber-rich bran layer, the middle energy-packed endosperm, and the inner nutrient-rich germ layer. The outer bran holds the mineral cache, with up to 80 percent of all the minerals found in the kernel concentrated in this coating. The bran also contains fiber, protein, and some B vitamins. The endosperm is a pocket of energy-yielding starch (complex carbohydrate), some protein, iron, and a minuscule amount of B vitamins, all used to nourish the growing seedling. The germ is packed with a gold mine of vitamins including vitamin E (wheat germ is one of the richest sources of vitamin E), B vitamins (especially high in folate), some trace minerals (iron, magnesium, selenium, and potassium), fiber, and phytosterols (plant hormones that lower cholesterol).

Why whole grains are best

When grains are milled or refined, they are stripped of the outer bran and germ layers and thus lose many of the naturally occurring vitamins and minerals, healthful fats, and phytonutrients. Processing leaves behind only the starchy endosperm. In 1942 the U.S. government passed a law requiring iron and B vitamin enrichment of processed grains to combat vitamin deficiency as a result of eating refined products, devoid of their natural lode of vitamins and minerals. This is why when you purchase a refined grain product such as white bread or white rice (made solely from the endosperm of grains), it will by law be ???enriched,??? meaning a few nutrients have been added back — often niacin, iron, thiamin, riboflavin, and folate. Unfortunately, what are lost in the processing and not required to be replaced are wholesome nutrients such as fiber, vitamin E, several B vitamins, potassium, minerals such as manganese, magnesium, copper, and zinc, and various healthful phytochemicals such as lignans, flavonoids, and saponins. Clearly, whole grains are the far superior choice over refined grains for fiber, vitamins, minerals, and other important nutrients.

A diet rich in whole grains — rather than highly processed, refined grains — has been linked with reduced risk of heart disease, stroke, type 2 diabetes, obesity, and certain types of cancers, as well as with lower blood pressure and improved bowel function.

The connection between whole grains and heart health is where the science is particularly strong, with a huge body of research backing the notion that diets high in whole grains reduce your risk for heart disease. Data from the Iowa Women???s Health Study have provided sound evidence that whole grains keep a woman???s cardiovascular system in good health, even after menopause. Researchers took detailed dietary and health histories from 34,492 postmenopausal women between the ages of fifty-five and sixty-nine and followed them over a nine-year period. The women who consumed the most servings of whole grains had more than a 30 percent decrease in risk of death from heart disease than the women who ate less than one serving per day.

Whole grains also stop inflammation of the arteries, according to a study published in the Journal of Nutrition. Inflammation is related to plaque buildup, or atherosclerosis. C-reactive protein is a protein circulating in the bloodstream that is used by doctors as a marker for inflammation and a predictor of future cardiovascular disease (a value above 3 mg/L is considered indicative of high risk for heart disease). Analyses of almost 4,000 American men and women showed that the higher the fiber intake (whole grains are one of the best sources of dietary fiber), the lower the blood concentration of C-reactive protein.

What???s good for the heart is also good for the brain, according to a study by researchers at Harvard Medical School. As part of the famed Nurses??? Health Study, 75,521 women nurses between the ages of thirty-eight and sixty-three were followed for ten years, providing dietary and health data at four separate intervals. The study found that nurses who ate two to three servings of whole grains daily were 43 percent less likely to have an ischemic stroke (blockage of the artery feeding the brain) than those women eating less than one serving per day.

The benefits of whole grains are not just for women — eating whole grains helps men live longer and healthier lives, too. Boston researchers examined associations between whole-grain cereal intake and risk of death from all causes in data drawn from 86,190 U.S. male physicians participating in the Physicians??? Health Study. Researchers followed the physicians over a period averaging five and a half years. Higher whole-grain cereal consumption compared to refined grains was found to significantly reduce the risk of dying not only from heart disease but in fact from all causes.

How much whole-grain food should you eat?

The most recent U.S. Department of Agriculture (USDA) food guide pyramid (http://www.mypyramid.gov) recommends consuming three whole-grain servings daily. If you???re like most Americans, though, your whole-grain intake is woefully short of this goal. According to the USDA, on average we barely even get in one wholegrain serving per day, with only roughly 7 percent of Americans eating three a day. The reason, say some nutrition scientists, is that Americans have become lazy about cooking and eating whole grains because they take longer to cook, chew, and digest than refined grains. Perhaps it is also true that outside of your grocery or health food store, whole grains are nearly impossible to find. When is the last time you ordered quinoa at McDonald???s?

My advice is that you don???t follow the path of the 46 percent of all adults who eat no whole grains at all. Instead, try to get in at least three servings each day to increase your fiber and nutrient intake and begin reaping the plethora of health benefits. Eating a morning bowl of oatmeal is a great first step to get you a third of the way there.

The Cholesterol-Lowering Power of Oats

Scientists have long recognized that oats lower cholesterol, especially ???bad??? LDL cholesterol, and have proven it in at least fifty studies in humans over forty years of research. Furthermore, oats reduce LDL cholesterol without a concurrent reduction in the level of ???good??? HDL cholesterol — and may even raise HDL. Some time ago, researchers at the University of California, Davis, performed a study in which 84 grams (roughly 3 ounces) of oat bran (the most soluble fiber-rich portion of oats) were added to the subjects??? usual low-fat diet. LDL cholesterol fell an amazing 17 percent in just six weeks.

Why should you choose oatmeal over a refined wheat cereal such as Special K for breakfast? Researchers at Colorado State University showed that eating oats can change the characteristics of LDL particles to a more desirable fatter and fluffier shape. Thirty six subjects were given either an oat cereal or a wheat cereal for twelve weeks. Not only did the amount of dangerous small, dense LDL particles drop considerably in the oat-eating group, but members also showed beneficially altered LDL particle size. This change protects you against heart disease because the smaller or denser LDL particles are more susceptible to oxidation, have less of an affinity for the liver LDL receptors (recall that the receptors are the only way out of the bloodstream for LDL), remain in the bloodstream longer than larger LDL particles, and can slip into the arterial wall easier.